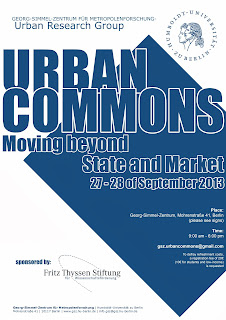 Urban space is a commons: simultaneously a sphere of human cooperation and negotiation and its product. Today, we need to understand urban commoning, the creation and maintenance of urban commons, as a dialectical relationship between state and capital (e.g. Hardt and Negri 2009). Rather than positing commons as beyond state and market (e.g. Helfrich 2012), this conference asks how to move there. In particular, we wish to scrutinize how a focus on commons might advance (or preempt) existing or emergent urban struggles.
Understanding urban space as a commons means that the much sought-after productivity of the city precedes rather than results from strategies of the state and capital. It challenges assumptions of urbanization as capital-driven (e.g. Harvey 2006). This idea resonates with a range of recent urban social movements, from the Arab Spring and the occupy movement, to the “Right to the City” alliance, and countless initiatives seeking to “Reclaim the City”. Initiatives to create “commons”, such as networks of small entrepreneurs, subcultural producers, initiatives offering direct services to the marginalized and urban gardening, are welcomed and even facilitated by governments in order to (re-)valorize urban space and lessen the impacts of economic restructuring. However, at the same time, the creative and reproductive potential of the urban commons is undermined by new attempts to exploit and control (i.e. enclose) them, which are exacerbated by austerity politics.
In this context, this symposium seeks to explore the role and position of commons in urban research and open the debate to contributions from all disciplines. The conference is divided into 6 panels, as follows:


Registration until 16 September 2013 at gsz.urbancommons@gmail.com.